Why do governments’ efforts to reform education not result in success?

Okay. I have written too many posts on this topic. But, I learn something new each time I write, a new connection or a better phrasing of my arguments. Here is the nth version on this topic.
My central arguments are:

First argument is bit self-evident. I wouldn’t explain much in this post. In the following post, I will briefly summarise the three issues with the frameworks of analysis in popular policy narratives, that end up being translated into policy.
I. Misconceptions
The first step to solve a problem is to know — what the problem is. If the problem is incorrectly identified, then everything from there is a downhill.
Some popular narratives often falsely identify the location of the problem with education. For instance
.. and so on.
All these have been proven not to be true by controlled studies. Essentially, the studies show that there’s no difference between guest teachers and regular teachers. It means that guest teachers aren’t the problem as said, there’s more to the problem.
This is an issue because — it occupies disproportionate mind space of policy makers, crowding out actual problems.
II. “Silver Bullet Constraint” approach
We usually talk of silver bullet solutions. Similarly, there is also silver bullet approach on the problem side. This is the thinking where there is a quest to uncover those “one or two” constraints that are responsible for poor quality. The implication is that if these are addressed, the job is done.
This approach to seek the one or two major constraints end up in policy approach where governments work only on one or two constraints at a time. Policy narratives in education are essentially a competition between one’s silver bullet constraints over others. For some, pedagogy is the constraint, for others school leaders is the constraint and so on.
The problem with this approach is that education doesn’t function like a wheel with spokes, where strengthening each spoke strengthens the wheel, translating into outcomes. It works like a chain where the end result is achieved only if all the links work properly.
Fragmented policies mean that we never achieve the desired outcomes because the current efforts require complementary inputs which are de-prioritized. For instance, infrastructure was that one golden constraint the past. Now, it seems to be teachers. We never had a reform that addresses all problems comprehensively.
III. Implementation framework with disregard to nature of task of education and required monitoring norms
Policy solutions in popular narratives are only about identifying constraints that are to be focused up on — teacher training, school leaders etc. They almost never delve into the nature of implementation aspects.
When translated into policies, bureaucrats end up education bureaucracy and implement education policies just like any other government task.
The problem is that education is fundamentally of different nature from the other major tasks that government does. Frontline worker in education requires and hence can’t be monitored by strict rules. It requires nimbleness. Ignoring this leads to inefficiencies.
An ideal implementation approach requires a capacity framework of thinking, that views reform as enhancing the capacity of the system as per the nature of the tasks.
The problems with lack of such capacity framework of thinking with disregard to nature of task of education is manifested in five ways:

Overall, the education policy reform is not about a particular policy. It is about a change in the lens through which we approach the problem. Once it’s done and if a government has enough political will, the iterative process will yield results. It’s simple but not easy. 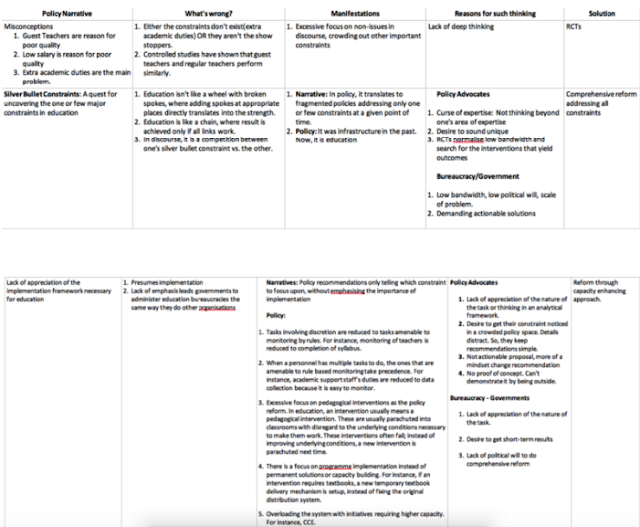