1. On women in Chess: The lower composition of women in top positions in explained used several parameters. One hypothesis is that men and women react differently to competition. A study explores this using Chess, a male dominated sphere. It finds that

The gender gap in performance is due to the gender composition of games. When a woman plays against another woman of the same ability, she has a 50% chance of winning. But when a woman plays against a man of the same ability, she only has a 46% chance. This is equivalent to a handicap of 30 Elo points when the opponent is a man.

when a group suffers from a negative stereotype, the anxiety experienced trying to avoid that stereotype, or just being aware of it, increases the probability of confirming the stereotype.

When a group suffers from a negative stereotype, a person from the group, leading the change, by acting contrary to the stereotype is burdened with the responsibility of disproving the stereotype. It results in anxiety, leading to a decrease in performance.

This insight has implications for big corporates and organizations recruiting women for top leaderships.

Overall, lower number of women in top positions or fields like academia or chess seems to be due to four factors: i) social conditioning which discourages girls from early age; ii) brute force of male numbers - if more males participate, there is greater probability of male representation at the top. For instance, if only 1/3rd of students appearing for an exam are females, there can be only be so much females in the top.;  iii) discrimination during the process; iv) negative effect of anxiety created due to responsibility to break stereotypes (as illustrated in the above study).

Nothing to do with genetics that makes males being inherently more intelligent than women.

2. Economists as plumbers:  Esther Duflo seems to have created big ripples in economics's academia circles with her Ely lecture, where she argued for a transformation of the role of economists - from just being theorists or suggesting policy ideas, to getting involved in the fine details of the plumbing. For instance, what should the job notification of a particular position should look like? Should it focus on public service or monetary incentives?.. and so on.

The shift in development economics' academia is visible - it shifted from macro growth theories to micro details, with the advent of RCTs. RCTs have shed light on important state capacity constraints, which is now leading to the 'economists as plumbers' narrative.

3. GFCF is on a continuous decline: Gross Fixed Capital "measures the value of acquisitions of new or existing fixed assets by the business sector, governments and "pure" households (excluding their unincorporated enterprises) less disposals of fixed assets. GFCF is a component of the expenditure on gross domestic product (GDP), and thus shows something about how much of the new value added in the economy is invested rather than consumed." 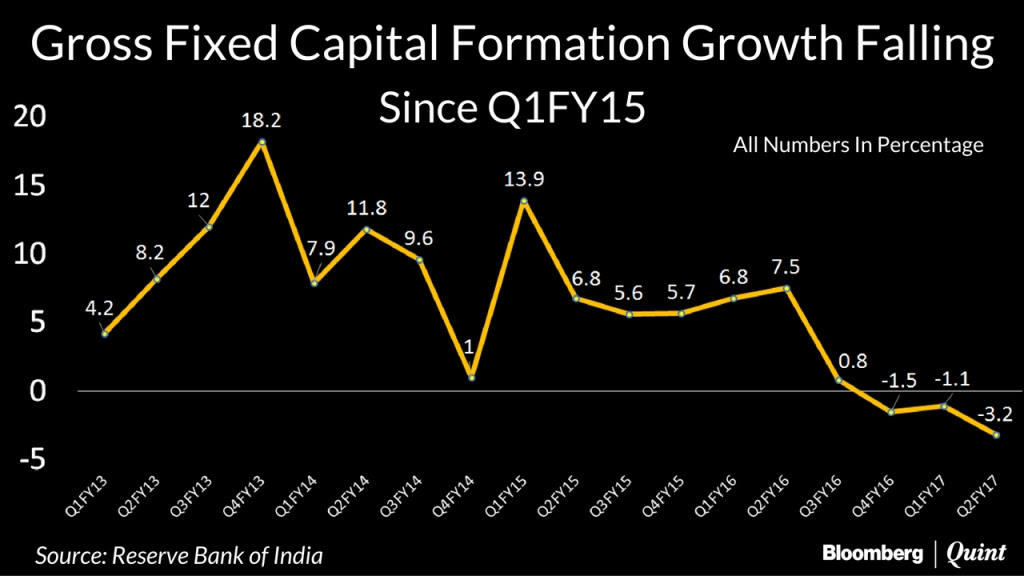 As one can notice GFCF is on a continuous decline since Q1 of 2015. It's a worrying sign of the state of the economy.

4. Sycophancy of economists defending demonetization has reached alarming highs: In a normal world, one can have honest disagreements on the assumptions behind an analysis, the meaning of data, its implications and so on. Sometimes, the arguments go beyond common sense, in order to fit into a particular narrative. It's not necessarily due to the lack of ability to discern evidence, it's due to the duty to defend. Samples from last week below.

a) Vivek Deheija quotes Hindu article saying that Nobel Laureate Prof. Tirole called demonetization as "good". On reading the article, one can clearly say that Prof. Tirole was telling completely the opposite - he said, going cashless is good but it should not be achieved in a manner that hurts the poor. The deliberate misinterpretation of a clearly written piece is unwarranted.

b) Shamika Ravi quotes survey data on support for demonetization saying that it 'destroys the myths of loss of trust in institutions'. Public support to demonetization and trust in institutions are two completely different things. The survey question doesn't intend to capture the trust. Further, one may still support the move due to a popular narrative of it hurting the rich etc but it doesn't mean that they trust the institutions now. For instance, the same people who support the idea would stock currency notes, despite constant reminders from RBI that there are enough currency notes and that one shouldn't hoard.

This is deliberately misinterpreting data to fit into the narrative. Ms. Ravi has done something similar earlier too. She just did a pre-post analysis of Delhi's Odd-Even policy to make strong statements like "the data is unambiguous in saying that Odd-Even failed". The claim of data being unambiguous is ridiculous to say the least. Even an undergraduate student would tell that one can't make strong statements about unambiguousness by just relying on pre-post analysis, especially when there are a number of visible dynamic factors that can affect pollution during the intervention. Further, it's concerning because her analysis came after a thorough rigorous analysis by Greenstone et al. that did a proper difference-in-difference study. Ms. Ravi's analysis didn't consider this or even attempt to explain the difference in results, as compared to a much better done study.

On another note, she praises RSS ideologue Gurumurthy's article that argues that the growth during UPA is due to asset price inflation. As Ananth Nageswaran says "That is simply not true. All that was required was few key strokes to know that this is not how GDP is calculated". A mere change in ownership is not production and it isn't included in GDP and GDP doesn't factor in asset prices inflation. A trained economist supporting arguments that violate 101 of economics is not done.

There's a clear  trend in all these analyses, if one can observe.

c) Surjit Bhalla says that demonetization "on the surface has had zero effect on growth". Amen!

I try hard not to make personal criticism in policy writings but the brazen sycophancy of some economists is sometimes too much to take.