A model to understand decentralization in education

Decentralization is one of the standard prescriptions in education reform. Understandably it is desired for many right reasons — the process of education delivery involves high discretion to be given to the frontline worker (in Lant Pritchett’s words) which is not possible to be monitored centrally. This is a goal that we must aspire for.

How does this turn out in action? There are concerns that decentralizing in contexts with weak capacity might amplify the problems instead of addressing them. If given more autonomy, a lazy, non-school attending teacher might use misuse the autonomy by reducing the syllabus and so on. Hanushek et al paper on school autonomy — “Does school autonomy make sense everywhere?” is a prominent paper which explores this phenomenon. Using PISA scores and responses to questions on schools’ power in decision making (also part of PISA), the authors find that

Another recent study on impact of decentralization in Indonesia suggests

“ no overall effect on achievement, but a negative effect on teacher effort, particularly in rural areas and among schools with inactive school committees.”

Bloom et al. paper on school management is also worth noting here. It uses data of 1800 schools across 8 countries and finds

In other words, the local capacity at school level, the accountability structures etc seem to be the key factor in determining the effects of decentralization. Intuitively, giving more autonomy to school systems with high local capacity enhances quality where as giving autonomy to ailing systems is detrimental. Good schools typically tend to have good management structures.

Coincidentally, Francis Fukuyama’s discusses a similar model in his paper “What is governance?”. To make things easier, I will be using his model and his diagrams from this paper as a base to elaborate, while tweaking it at places as necessary.

I also discuss this in detail in my book “UnpackED — The black box of Indian school education reform” (link to google form that requests email id. pdf is free to download). In the book, I also propose and discuss a model to understand state capacity in the context of education. I am sharing summary of the key ideas regarding decentralization below.

As discussed, the simple model is that there exists an autonomy at which optimum quality is achieved, for a given capacity. Giving no autonomy makes the system ineffective while giving complete autonomy with no autonomy is also counter-productive. It can be represented as in Figure 1. 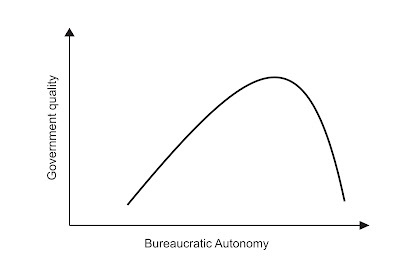 Bureaucratic capacity can be thought of as — if given a responsibility, what’s the probability that the local system will do a) without corruption/negligence and b) with good quality, which requires skill.
State capacity of a broader system is the capacity to design and implement policies.

Figure 1 depicts situation for a given bureaucratic capacity (BC). For a given BC, you can only give as much autonomy. The autonomy that can be given increases with the BC of the capacity. Consider another system with higher BC than the one in Figure 1, the optimum autonomy point will have to be to the right. 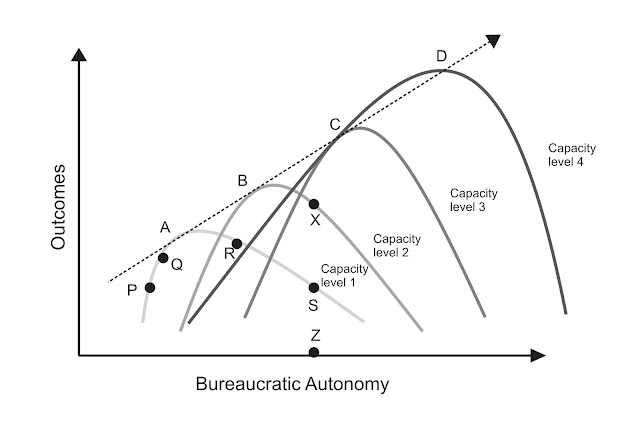 How do we understand decentralization processes using this model?

Points P, Q, R and S are on the curve of the system of same capacity. P & Q are to the left of optimal autonomy point while R & S are to the right of it.

Does that mean that we shouldn’t ever decentralize? No. One might note that the outcomes corresponding to autonomy levels at Point S (Z) yield higher outcomes if the BC is higher (point X). It means that if only your BC was higher, you would have reaped more benefits from decentralization.

The central challenge can be rephrased as figuring out a way of moving from point A to point D. Should we first increase the autonomy to the levels of point D and then build capacity later taking it from Capacity 1 to Capacity 4? OR Should we increase the autonomy only after building the BC? The state capacity of broader system is crucial in smoothing this transition by hand holding the local systems to build BC.

In real life, there are costs-benefits to each of these approaches for a given context. If the time taken to build capacity is much longer, then the cumulative negative effects of increasing the autonomy first might outweigh the benefits for the near future. On the other hand, decentralization often comes after fighting many entrenched interests. Reversing it to bring back the system to optimal point might undo all the hard work done to ensure the reform. The way then is to first decentralize and then build BC. The decision has to be taken as per the political economy costs, constraints of a particular context and what the politicians think is the time required for them to build BC.

There are two lessons to policy makers from above framework.

One, decentralization is only the means not the goal. Often, decentralization is seen as end goal of reform and not as a means. In such cases, the autonomy is increased but efforts aren’t made to hand hold the local systems to build BC. It might result in adverse effects. On the other hand, if decentralization is seen only as a means but not the goal, the efforts don’t stop with increasing autonomy. Building BC is also taken up with similar seriousness. The critical issue here is the time. Increasing autonomy without caring to hand hold might make the situation go out of hands. Sincere efforts to build BC reduce the time of transition it thereby reducing the costs of decentralization. This is of course a hard task which involves coordinating with communities, changing cultures of work, dealing with motivation of teachers and so on.

The Indian experience of decentralization in education so far reflects the first mode discussed above, viewing decentralization as a goal and not the means. Several attempts have been made by numerous state governments in the past to increase the autonomy to local systems (powers to recruit teachers, penalize teachers, set curriculum etc) but all of them have back fired, which made these governments to quickly recall such reforms. Such repeated experiences have built a strong sentiment against decentralization making it an insurmountable challenge.

A new government in the capital of India, Delhi is the only exception which is taking the bull by its horns. It first increased the autonomy to schools giving them the power over practically all administrative aspects. It was then clearly communicated to the principals that now that powers are given, it is their responsibility to ensure quality. Principals are being given training and mentorship by top management institutes, curriculum experts to help them achieve these. Along side, efforts are made to improve the school committees by involving communities. Elections to school committees were conducted for the first time. One member of each such committee has a nominee of a local legislator to act as a bridge. The changes in the functioning of bureaucracy in this context make an interesting case that deserves to be studied, probably through an ethnography. Hope it stands out as an example of positive success of decentralization.

Two, education reform has to be comprehensive, not piecemeal. For effective results, efforts to address all the problems have to be made at the same time. One can't afford to fix infrastructure today, decentralize tomorrow, build capacity day after and so on. The results will only be achieved only after all these are addressed beyond a threshold not any time before. With a sequential approach, it will take eternity to reach there. With a comprehensive parallel approach, we reduce the time taken to achieve results by leveraging on the complementary effects.