State capacity or governance is broadly defined as the capacity of the state to implement policies. There is an actively ongoing debate on measuring state capacity. Initially state capacity was measured as the capacity to extract tax but questions remain. How do we know that the tax extracted is put to better use in other areas? How do we know that capacity to extract tax forcefully is also reflected in delivery of other public services? Some studies use proxies to measure state capacity. In one of the posts earlier, we discussed a study used the fraction of letters returned as proxy for implementation capacity of a state. Some others suggest using accuracy of census data as one of the measures, because more or less every country collects census data. Some argue that outcome measures should be used but then how do we that if one policy is implemented successfully, the same would be the case for future policies too? Again, some suggest that procedural measures are to be used. The broader debate on this is beyond our scope but two points in this debate are pertinent to our context.

There are two useful frameworks to think about this. The first is to categorize policy design and implementation, and then analyze their interaction. Let us take the analogy of manufacturing a product.

There are broadly two types of approaches that one can take to manufacture a product.

The first approach is similar to doing a surgical operation. One has to be careful at every moment; each step has to be taken with extreme care. Let us call these as 'research tasks'. Quickly reaching the organ as soon as possible and then taking care of things later, isn't an option. The mistakes here are costly.

The second approach is similar to washing a stain off the shirt. One can quickly try and see which detergent works and get the job done. Instead if one tries to do in depth analysis of the chemical composition of the detergent and suitability to cleanse the stain, then it can be an unnecessary and fruitless exercise.  Let us call such tasks where trial and error is the best method, as ‘iterative tasks’.
Any task should be put in any of the two categories above before implementation. Categorization of the task and its implementation can be imagined in form of this 2 x 2 matrix.

There are again grey areas between correct & incorrect and good & bad. For the sake of simplicity, let us stick to this matrix.

Consider the first possibility, the task is categorized correctly and is implemented properly. This is an ideal scenario.

The third and fourth possibilities are equally dangerous or ineffective depending on the situation. These tasks are incorrectly categorized. If one does research on chemical composition of detergent for one year before washing a shirt, the stain is removed after several days of research but the process is ineffective. This is an example of an incorrectly categorized task, executed well.  The differentiation between ineffective and dangerous depends on the context. Ineffective operation in health can be dangerous but in some other areas it needn’t be. This can be summarized as below.

Francis Fukuyama in his paper ‘What is governance?’[i] discusses a two dimensional framework of capacity and autonomy to understand state capacity. He says, for example one has to procure an advanced strike fighter. One way to do this is to just give a mandate to procure an advanced strike fighter. The other way to do this is to mandate “purchasing a strike fighter using contractors that increases employment in districts X and Y, or through minority and women-owned businesses of to achieve Z degree of performance desired by a rival service.”

A completely autonomous bureaucracy, as in the first case, has just mandates set and is responsible for managing internal rules while a non-autonomous or a subordinate bureaucracy, as in the second case, is micromanaged with a myriad of rules and regulations. Autonomy gives scope for innovation and experimentation, at the same time this can be misused. Subordination ensures some form of accountability but can lead to inefficiencies. Thus, he argues there may be an inflection point in the autonomy vs. quality curve. 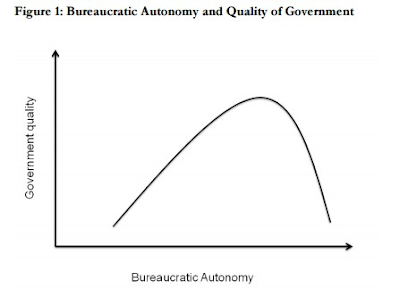 Where should this inflection point be? It depends on the capacity of the state. If the bureaucracy is full of political appointees or is under performing then one wouldn’t want to give too much discretion to them. Hence, the inflection point would be towards left in those contexts. In contexts with strong state capacity, it would be towards the right. The optimal levels of autonomy for different capacities would looks like this. 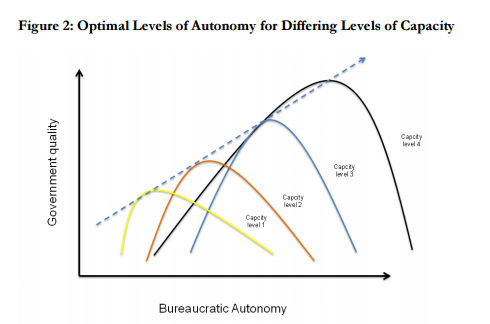 The framework in general would look as below. 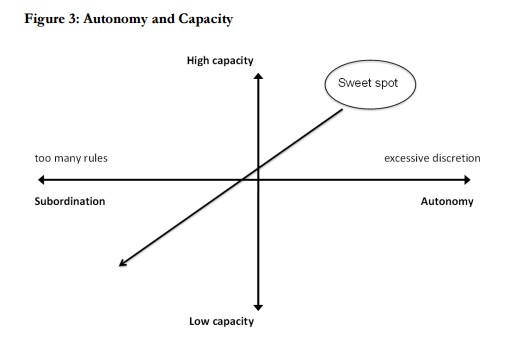 Fukuyama then hypothetically locates various countries on this graph. 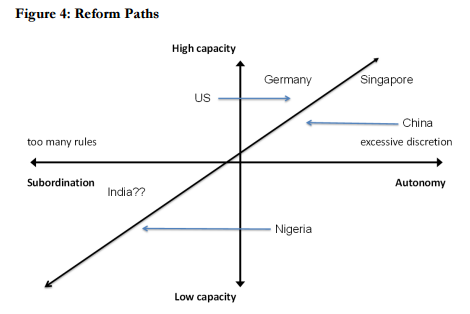 He then points to the complexity in locating India on this map because there are cases like spectrum auction where more rules have to be formed and there are also cases like local governments where more autonomy has to be given. This, he argues underscores the need for context specific decision and that aggregated measures of quality of governance can be inadequate and misleading.

Average is an interesting concept. In order to get a sense of a context, we would ideally desire to have a number which represents its true picture. Collapsing everything into a single number can be misleading there exist distinct clusters in the data, especially when there are limited data points. For example, if we are talking of only 10 people, 5 super rich and 5 ultra-poor, depicting them by their average income will not be intuitive. When the number of data points is less, people try to compare the average with the contexts that they know, and in cases like these, where average is far off from both the categories, it doesn’t seem useful. One way to address the problem is to identify these clusters and talk about their averages.

In our context, using the capacity vs. autonomy curve to depict all contexts within a specific country might be challenging. Hence, one can try grouping problems by their nature and analyze accordingly. For example, extraction of tax needs capacity of certain nature. In this case, strict rules can be formed and the action has to be performed using threat and coercion. Designing a monetary policy needs capacity of other nature, which is more of an intellectual exercise and there is limited interaction with the public.  Threat and coercion can’t be used in case of health and education. These contexts require certain discretion on the part of the person in contact with the public and performing this task requires engaging with the public. It might be useful to discuss state capacities in each of these contexts rather than in a general context.

Lant Pritchett proposes a useful framework to categorize these problems or contexts, in his working paper -  Folk and the Formula: Fact and Fiction in Development. Relevant excerpt is being reproduced below.

“Think of any task you may want a government organization to carry out (or contract out): setting the discount rate, building bridges, teaching 3rd grade, prudential regulation of banks, producing urban water, giving vaccinations, to industrial policy, to collecting property taxes, to enforcing laws against rape, to settling private contractual disputes, paying old-age pensions. With a task in mind ask, does the successful accomplishment of the public purpose goals of that task require:

Even within a particular sector, there are different types of tasks that are to be performed and the capacity can vary and hence has to be analyzed accordingly.

In summary, the design of a policy has to have an optimal balance of autonomy and rules, which is again dependent on the context specific capacity. The context specific capacity and desired approach can be understood and be based on the guiding principles for categorization discussed above – transaction intensive, discretionary, high stakes and requiring innovation. The next few posts build on these two principles in the broader context of education policy.


[i] What is Governance? – Francis Fukuyama