The education diagnostics map is a visual form to represent linkages between different aspects of education. The invisible layer behind it responsible for holding everything together and functioning of these can be called as state capacity. A significant section of this series deals with state capacity and laid out strategies to strengthen the state capacity. Once the state capacity is strengthened and while it is in the process of strengthening, it is also important to use it to address the problems. One can pick up all the different aspects in this map (and those which are missing) and work on them. Within each of these aspects, there are specific problems. Listing each of these individual problems and an in-depth analysis of those is beyond the scope of this series. However, this section highlights some of these problems. The idea is again not to prescribe any solutions but to highlight the issue and discuss relevant evidence if any. 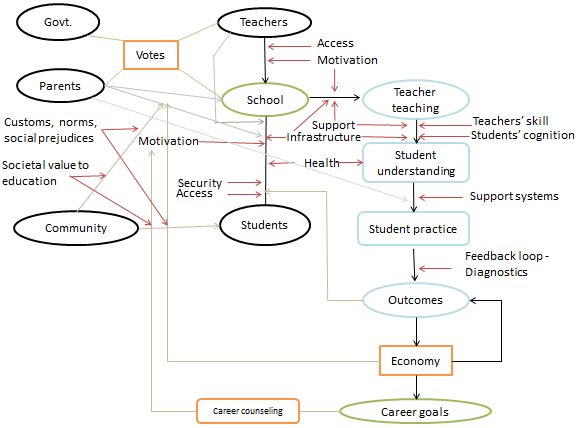 I. Imparting literacy to the existing illiterate population – Majority of discussion in the previous sections was about educating the children in school but what about adults who are illiterate? Literacy is empowerment - it reduces dependency and gives dignity. As per some reports[i], there are 28.7 crore illiterate adults in India. Equipping them with at least basic reading and writing skills is a challenging task.

Brij Kothari pioneered the approach of Same Language Subtitling (SLS), where the lyrics of song or text of speech is displayed in the same language as the audio.  The idea is that when one listens to the audio, along with the subtitles it can build reading skills over a period of time. Brij Kothari and his team and several other independent researchers tested this idea in multiple contexts and found encouraging results[ii]. In one of the interesting studies[iii], a weekly 30 minute TV program of Gujarati film songs was telecast across the state of Gujarat with Gujarati subtitles.

In Los Angeles a purely mobile based adult literacy intervention called Cell-Ed provided lessons through a simple cell phone. Users have to activate it by calling a telephone number. The course is divided into 437 micromodules in total. Each micromodule is a one to three minute audio, assignments are sent inform a text message and the user has to reply to that text message. If the user passes the module, then (s)he is promoted to the next module. A randomized evaluation studying its effect found encouraging results[iv] too.

The limitation of this approach is that its dependent on user’s initiative while the SLS approach touches people invisibly. There can be several other possible approaches which can be tried out. The above two are mentioned for reference.

II. Career guidance and mentorship – We live in a world that seems to be saturated with information but still at times we reach out to people for guidance and suggestions. It’s because there is a difference between information and mentorship. Students in urban areas and with educated parents are exposed to diverse opportunities and have channels to seek guidance. It might not be the case for those living in rural areas not integrated to the information world. At times, many people owe their success to some information or guidance from a person which showed them their way.

Dr. Anirudh Krishna of Duke University, an ex-IAS officer surveyed 1,500 recent (the then) entrants to a variety of engineering colleges, business schools and higher civil services. He observes that class and caste, parents’ lack of education and rural upbringing make important difference. He says, “individuals who have succeeded in surmounting these obstacles have almost invariably been assisted by a relative or friend who motivated and inspired these students, providing them with mentorship along with career information and advice.”[v] This is relatable to many of our experiences.

The policy lesson from this is to bridge this information and mentorship gap. The approaches to address this issue can vary subject to innovation in thinking. Some of the straight forward approaches are sharing a booklet with career guidance, organizing career fairs etc.

III. Demonstration of success of education -  Studies conducted by Dr. Anirudh Krishna also suggest that “the longer the time spent in rural areas and studying at a village school, the smaller are the chances of making it into gateway education institution, such as a medical or engineering college or MBA school”.[vi] He further notes “Not one child of an agriculturist parent educated in a village school throughout was part of the entering class of the top-tier business school in our sample. In middle-tier institutions, such individuals constituted no more than 3 per cent of the total intake. Even these individuals were mostly not from a poorer segment. If one is rural and poor or rural and poor and female — that is, if one has two or more handicaps — then one's chances of making it into any gateway institution or higher-paying job are virtually non-existent. It should not be surprising then to find that young people in villages rarely aspire to higher paying positions. When none before them has made it to any of these places, from whom will they get guidance and motivation?”

Successful examples from their living communities can act as a strong demonstration of success thereby motivating them. This brings us to the next aspect.

IV. Gifted children – Most of the discourse on school education is about stopping children from falling behind but mentoring students of exceptional abilities is also important. The challenge is to both identify them and provide appropriate resources to enhance their potential.

V. Children of seasonal migrants – Seasonal migration has increased in India with not so encouraging prospects in agriculture and availability of low income jobs in urban India. When parents migrate, often they either take their children along with them or asking elder children to take care of their home, breaking their education.

Some NGOs have set up local schools for migrant workers near construction sites. Other approaches like permission to take admission in a local school for a while etc., can be explored.

VI. Educating differently abled children – Some estimates say that around 10-15% of students are dyslexic in India, which is a very high number. [vii] We need approaches to identify, diagnose such children and deal with them accordingly.

VII. Transition from mother tongue to English – Many studies suggest that it is better to educate first generation learners in their mother tongue. Teaching in a foreign language can be taxing on children limiting their comprehension powers and hence may fall behind.

On the other hand, most higher education institutions function in English and it has become an important skill in private sector with increasing economic returns to being fluent in English. One study finds that “being fluent in English increases the hourly wages of men by 34% and of women by 22%”[viii].  Students who study in mother tongue find it difficult to transition to English and can lag behind or be at a disadvantageous position when it comes to job markets.

Though one is educated in mother tongue in primary school, they may have to gain English skills at some point, preferably at school level. When and how should that transition happen?

VIII. Health and Nutrition – The relation between nutrition and cognition is well known but the malnutrition figures of school going children aren’t encouraging. Naandi Foundation, a famous NGO conducted a survey on malnutrition called Hungama for Change. In its 100 focus districts, it found that 42% children under five are underweight and 59% are stunted.[ix] It further found that, only 11% mothers reported to have used soap to wash hands before a meal and 19% do so after visiting toilet.

Simple practices like hand-washing before eating food and after visiting toilet can be of great help. One study finds that mid-day meal scheme is being successful in compensating for early nutritional deprivation.[x]

IX. Incentives to parents and students to increase school attendance – Poor attendance of children is one of the most commonly cited problems. Some argue that children don’t attend school because they aren’t learning anything there and some argue that children don’t attend because they (parents) don’t value education. Both may be true depending on the context. Several approaches including incentives to parents and students have been tried out but with mixed results.

X. Positive economic shocks can lead to dropouts – When there is a local industry boom with good wages for non-skilled labour, it may make sense in short-term for some students (families) to drop out of school and earn money. This was observed in US when fracking (a method to extract oil) became widespread in extraction from shale and oil gas reserves. It increased high school dropout males especially in male students.[xiii]

A similar phenomenon was observed in India in case of MNREGA. One study finds that "each year of exposure to NREGS decreases school enrollment by 2 percentage points and math scores by 2% of a standard deviation amongst children aged 13-16"[xiv]

Is this a matter of concern? It depends on the type of jobs being generated. If the jobs generated are fairly permanent, not in terms of a permanent employment but jobs with long term prospects or if it takes at least one generation for these skills to become obsolete, then it can be beneficial. People who take up these jobs would continue working for significant time. With stable incomes, they can make long term investments in their children's education which hopefully moves them up the economic ladder. This would also incentivize people to migrate to places closer to industries and urban areas where there is better access of educational and health facilities.

Instead, if the jobs produced in local economies are temporary and fade off after few years, households might have earned income during the period but they wouldn't have attained education if they had dropped out of school. This can trap them in a complex situation where they find it difficult to come back to school and the skills attained by them in one industry aren't transferable to other industry. However, this doesn't mean these industries shouldn't be desired or be obstructed. It is relatively better than the current situation.

One should be cautious and aware of this especially when we are talking about creating jobs in manufacturing sector, a significant part of them being low-skilled jobs.

Concluding, these aren’t the only problems, there can be many others. This is an effort to highlight some of them. The solutions to all the problems above needn’t come from government alone. They might need a mixed approach but it is important to take cognizance of these problems.