What if we had forced Sundar Pichai to stay back in India?

Sundar Pichai, educated at IIT Kharagpur in India is now appointed as CEO of Google. This brings back the debate on effects of high skill migration. The common concern being that migration of high skilled workers, often educated with public money is harmful to India. In this context, this post summarizes recent discussion paper Losing Our Minds? New Research Directions onSkilled Migration and Development by Michael Clemens. Quoting relevant excerpts from the paper would be an apt description, I suppose.

The paper argues that traditionally the research on migration has been with the assumption that, migration harms development. With this assumption, the further research was about estimating the extent of the harmful effect and about policies to obstruct migration. "But that paradigm has accumulated an increasing load of anomalies that it cannot accommodate. It may be time for the literature to move forward resting on a new set of axioms", the paper says.

1) Let us consider this argument that the skilled migration has substantial negative effects on the skill stocks in the country. There are two effects at work here. One is the direct effect where migration of one person means one less worker in the country. Second is the indirect effects which include a variety of factors - growth, famine (famine or wars in country can make people migrate), reverse effects (as high skilled people migrate, this can increase expected returns of education and hence more people try to acquire these skills).

Let us look at this graph to see which effect dominates. 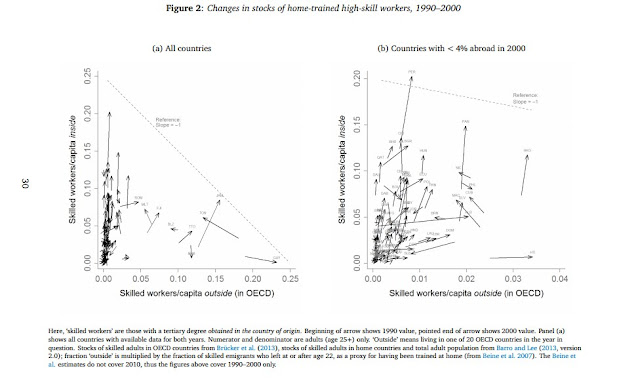 The vertical axis shows the fraction of adults inside each country with a tertiary degree. The horizontal axis shows the fraction of each country’s adults who got a tertiary degree in that country and later moved to an OECD country. Each black arrow shows how one country moved between 1990 and 2000. Panel (a) shows all developing countries where data are available; panel (b) shows the same data ‘zoomed in’ on the clump of countries with low emigration rates. (The dotted line in panel [b] retains slope –1; the horizontal axis is stretched.) The data do not cover the year 2010 because currently-available estimates of skilled migration for that year are by country of birth, not country of training.

Countries should move ‘southeast’ in this graph, roughly paralleling the dotted line of slope –1, if the direct effect dominates. That would imply something close to a one-for-one tradeoff between skilled workers leaving and skilled workers inside. But the data look nothing like that. The vast majority of countries either moved to the left (skill stocks abroad fell) or they moved to the right and up, with positive slope (87 of the 100 in Figure 2). Skill stocks inside developing countries are primarily shaped by other forces, separate from the direct effect. 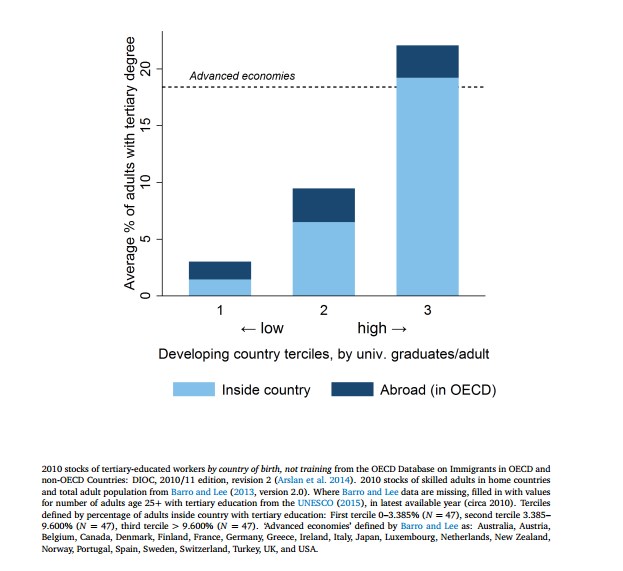 Again we see that skilled emigration does little to explain low stocks of human capital in developing countries. The gap in graduate density between poor countries and rich countries would be little affected even by the draconian measure of obliging 100% return of all tertiary- 5 educated people born in poor countries, even if they grew up and acquired skills abroad. A more moderate but still drastic policy of obliged return for, say, half of skilled emigrants who acquired their skills at home—a limited subset of skilled emigrants—would change homecountry human capital stocks by a small sliver of the dark bars in Figure 3. Human capital shortages in poor countries would be barely affected, even mechanically.

The benefits of migration and corresponding literature are listed below, excerpts from the paper.

The most internally-valid evidence for these effects comes from natural quasi-experiments in single countries, with circumscribed external validity.

This evidence suggests that even very large and sudden emigration by skilled workers can, in some settings, cause human capital investment that offsets the departure.

I don't think this is in Clemen's paper but a recently published paper explored similar effects regarding Gurkhas of Nepal.


considering the introduction of education as a selection criterion to recruit Nepalese men in the British Army. This change raised educational investments by 1.15 years and increased the average education of men living in Nepal even after allowing for emigration. Despite not being selected in the British Army or emigrating elsewhere, these non-migrants benefited directly from additional schooling.


2) Technology transfer:  Skilled migrants are known to act as conduits for the transfer of new technologies to their countries of origin.

It has been known for some time that the more migrants from developing countries live in rich countries, the more trade occurs between those countries (Rauch 1999). In recent research it has become clear that this relationship, too, is stronger for high-skill migrants than for low-skill migrants (Felbermayr and Toubal 2012; Aleksynska and Peri 2014).

Many beneficial interactions with the high-skill diaspora would have been extremely difficult to foresee and deliberately create. In fact, well-intended policy might have eliminated them.


Dr. JP (LokSatta) one remarked - Brain Drain is better than Brain in Drain.